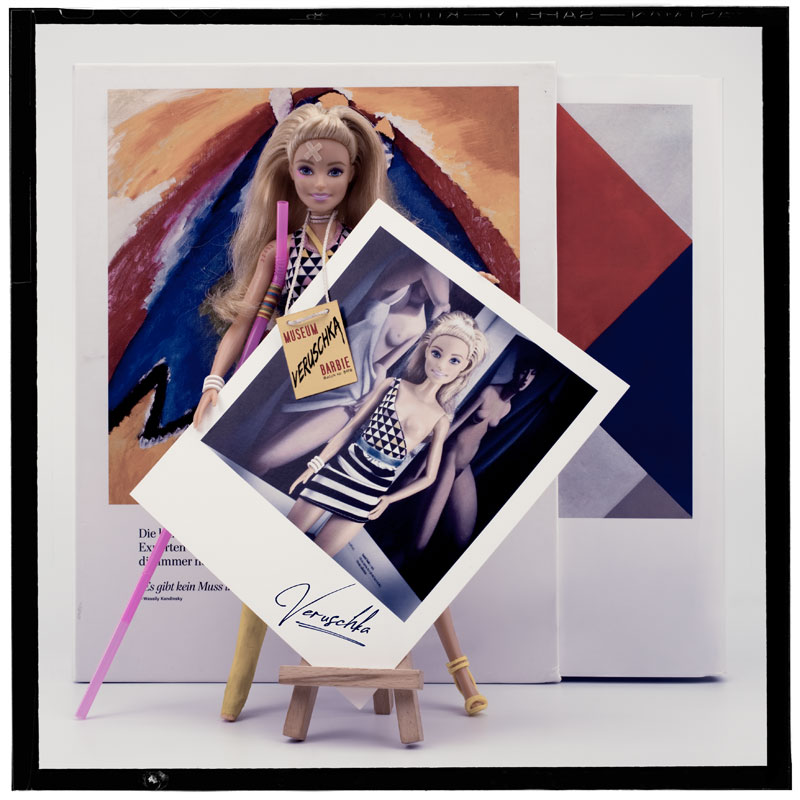 Barbie VERUSCHKA was flattered to have her first autograph card out. It was signed by her with the biggest marker the little plastic doll could handle. Also, the Folies' blonde drama queen pressurized every crew member, the freshly arrived camel included, to haul and push and pull some heavy art books on stage so that she could make her artistic statement. Two days of sweating and the air was filled with grumbling and cussing of the roadies. At least, thereafter they all slept very well.

Barbie's smile is a 'teaser act'. Accept that and move on. Forget about it. No? A spark ignites her synthetic eyes, hinting at the thoughts behind them. To take this photograph seriously, you are required to waste time and so to spend it, but this is a small price to pay. It is Folies Barbie after all, and nothing here is as you know it. With spent seconds, she tugs at the soft fabric of her dress as you become aware of the colors that you did not quite notice before. Do they animate her? You ask as you perceive a sense of the artists' marks. The Mountain she suggests as the fabric slides off her shoulder with a smile as she trains your eye and so your soul. Spend a few more seconds; she beckons, and you do because you notice the bold squares and triangles that you did not see before, the diagonal lines providing a sense of relief in their counter-compositions. What is it about her that led to that thought? Unexpectedly you realize that what started as a picture on a two-dimensional plane has evolved into something entirely different. As this realization dawns on your mind, your fast-beating heart instructs your eyes to dart and search for the exit. How much time have you spent? It has been just a moment, but your intuition knows it has been an eternity created through the photographic stacks that you saw on your very first glance but never dreamed would capture your essence and mine. Folies Barbie - where Barbie dolls convey the universal and absolute truth of plastic art. ~ Barbie Q

Life is a great big beautiful three-ring circus. There are those on the floor making their lives among the heads of lions and hoops of fire, and those in the stands, complacent and wowed, their mouths stuffed with popcorn. Welcome, welcome to Cirque Barbie! The grandest show on land or by sea. Inside you’ll experience more wonders than most people see in a lifetime. You can sip magic from a cup and buy dreams in a bottle. But before you fully enter into our world, you must remember it’s all a game. What happens beyond this gate may frighten or excite you, but don’t let any of it trick you. We will try to convince you it’s real, but all of it is a performance. A world built of make-believe. So while we want you to get swept away, be careful of being swept too far away. Dreams that come true can be beautiful, but they can also turn into nightmares when people won’t wake up. When the show is over and the tent is packed, the elephants, lions and dancing poodles are caged and mounted on trucks to caravan to the next town. All that is left is another performance, another tent and set of lights. We rest in the knowledge: the show must go on. Give them bread and circuses and they will never revolt. 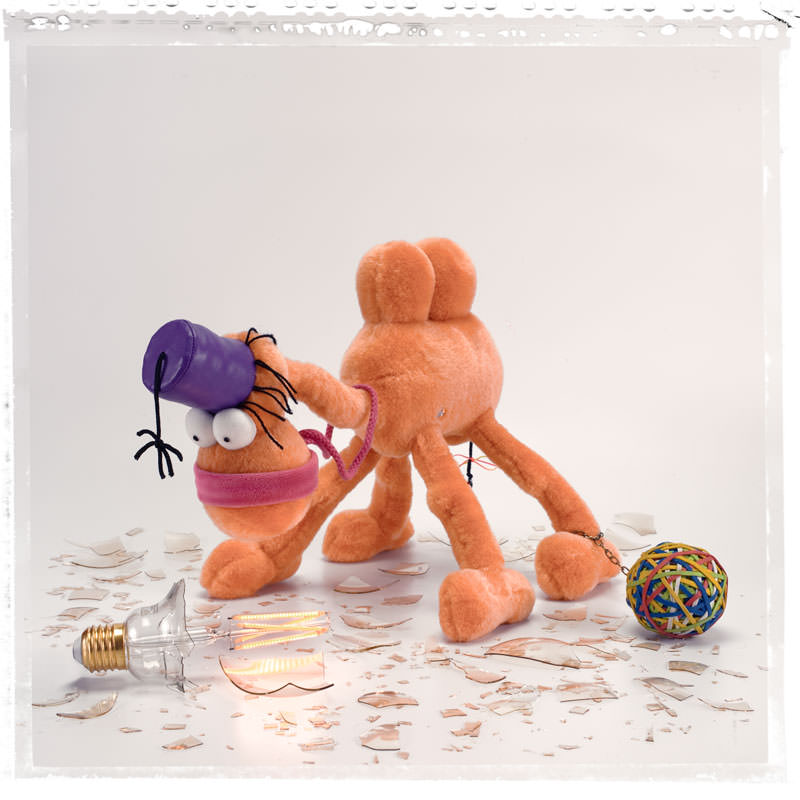 The jester is a creature of chaos. His appearance is an affront to our sense of dignity, his actions a mockery of our sense of order. Freedom is always being chased by authority. They are funny precisely because their shy hopes lead invariably to brief flings of exhilarating disorder followed by crushing retaliation from the status quo. It delights us to watch a careless clown break taboos; it thrills us vicariously to watch him run wild and free; it reassures us to see him slapped down and order restored. After all, we can condone liberty only up to a point. The laughing, joking court jester, who is, in reality, a Shaman, has all the attention of a king, for there has always been an element of danger lurking about beneath the surface of his smile. The jester figure has had so many meanings in different times and cultures. The jolly, well-loved joker familiar to most people is actually but one aspect of this protean creature; elected to fulfill a comic role which could allow others to see them as ludicrous rather than as terrible reminders of the forces of disorder in the world. Jesters have often had ambiguous and sometimes contradictory roles to play. The jester is used to lose. Loss is his prologue. 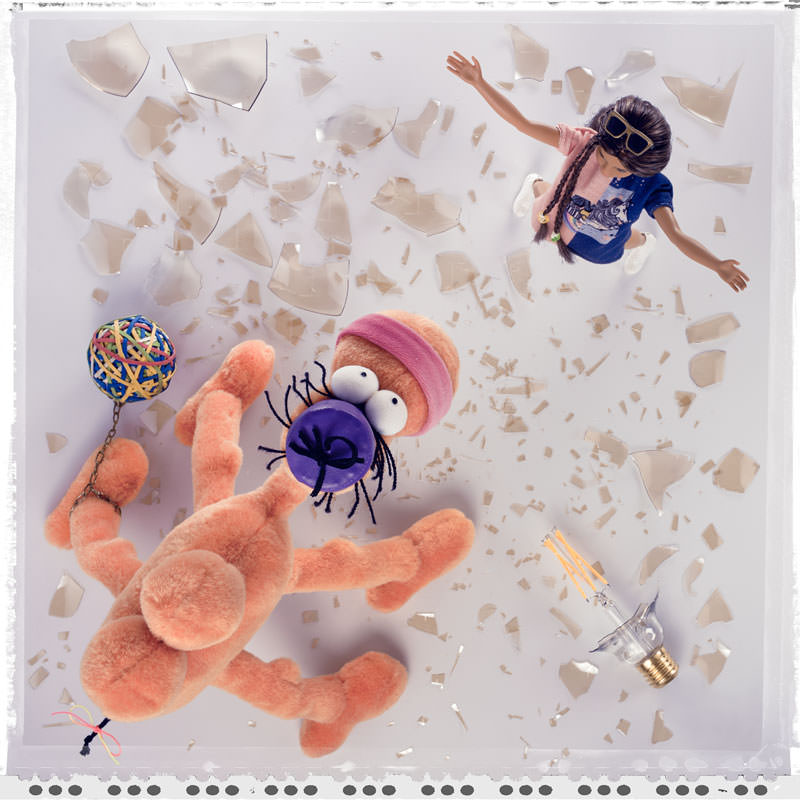 Everyone tries to make his life a work of art. We want love to last and we know that it does not last; even if, by some miracle, it were to last a whole lifetime, it would still be incomplete. Perhaps, in this insatiable need for perpetuation, we should better understand suffering, if we knew that it was eternal. It appears that great minds are, sometimes, less horrified by suffering than by the fact that it does not endure. In default of inexhaustible happiness, eternal suffering would at least give us a destiny. But we do not even have that consolation, and our worst agonies come to an end one day. One morning, after many nights of despair, an irrepressible longing to live will announce to us the fact that all is finished and that suffering has no more meaning than happiness. Your battle, your fight isn’t against the world but against yourself and the only way to come through all of it and beyond, to win, is self-improvement which needs to be gradual and progressive with the transverse of each day. 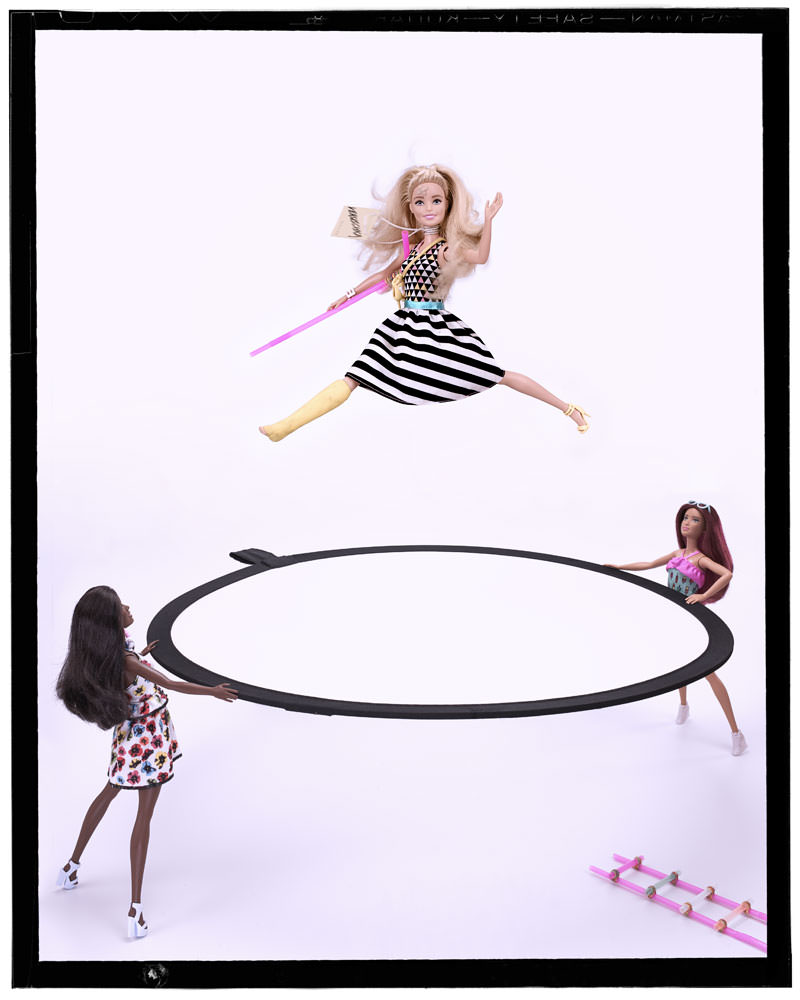 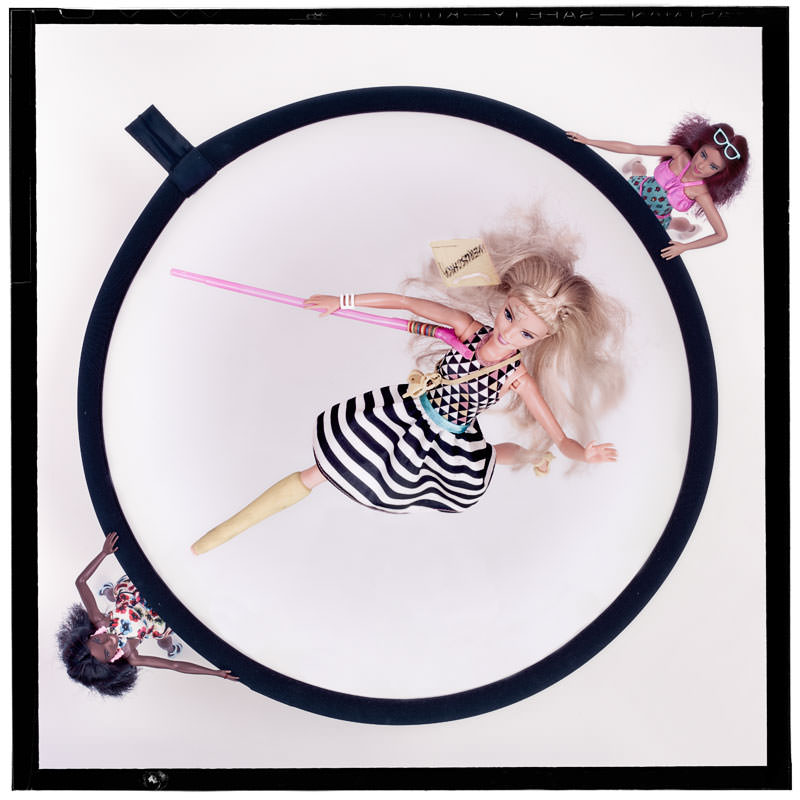 Cirque Barbie | Those Who Don't Jump Will Never Fly

Barbies were contemplating existentialism. Oh, erm, fuck, did I say that out loud? I didn't know you were reading this. They looked around furtively to see if anyone else heard and gave me a scathing glance. I assure you very few women, and almost no men could survive this. The Barbies laugh as they climb into their outfits for tonight's circus show. A visual complexity, their curved lines are touching their start and end. So concentric and endless, round in all the right places. Beautiful little details for dolls, no? Always it is Veruschka who, despite her broken leg, has the guts to jump on trampolines as she seeks what we all do. What lifts life from the sphere of mere physical existence towards liberty? Arts, religions, and sciences do. All branches of the same tree that attempt to understand the world around us and share this understanding. There is beauty in the predictability of the laws of mathematics that is equivalent to the vision of an artist's hand or a photographer's eye and yet a fundamental truth remains. Circles don't fit through squares, and Barbies don't care. They go infinitesimally small where they reign supreme; atomic-level for the bombshell babes. Here it suggests perhaps that a circle can indeed fit in that square in a way that is transcendent and therein lies a human truth. Diversity is enriching - and to assume is the death of individual freedom. 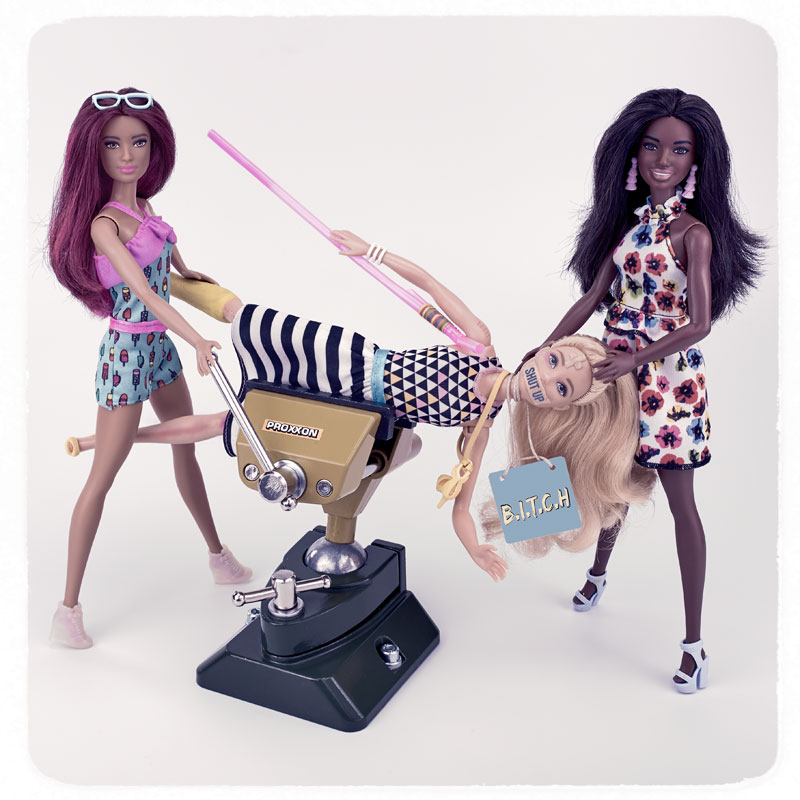 After unboxing this new big greenish gadget, the insane Barbie dolls first didn't know what it is used for. After studying the Chinese instruction manual, fortunately underlined with many images, they immediately wanted to put it into action and to test the clamping force of the vice. And VERUSCHKA, still the wounded poor with her broken leg on a crutch, was not fast enough to hobble away ...

Photographers bring forward to light, to presence, the unseen by others. Photography is an elegiac art, a twilight art. Most subjects photographed are, just by virtue of being photographed, touched with pathos. An ugly or grotesque subject may be moving because it has been dignified by the attention of the photographer. A beautiful subject can be the object of rueful feelings because it has aged or decayed or no longer exists. The very question of whether photography is, or is not, an art is essentially a misleading one. Although photography generates works that can be called art, it requires subjectivity, it can lie, it gives aesthetic pleasure, Photography is not, to begin with, an art form at all. It is a medium in which works of art, among other things, are made. One would think that a photographer finds the images but the truth is the images should find the photographer. This happens when one is receptive, being alert and curious, keeping an open mind. The photographic skill is reflected in the ability to create an experience of the image and successfully convey it to the viewer in that single frame. To photograph what you know is there, not what you can see. 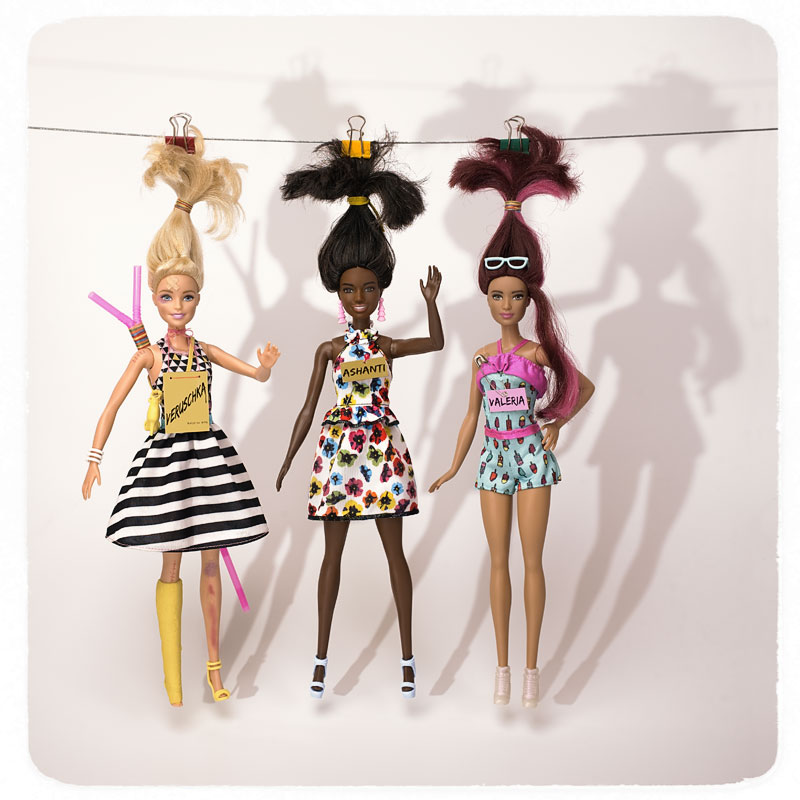 Les Mannequins Des Folies Barbie | What Was The Barbie Like Before She Was Photographed?

The Indians say to draw someone's portrait is to steal their soul. I take photographs, does it mean that I am just borrowing them? Though photography is like stealing - you rob someone of a moment that exposes something essential about their character, their soul if you like. To photograph people is to violate them, by seeing them as they never see themselves, by having knowledge of them that they can never have; it turns people into objects that can be symbolically possessed. The terrifying thought that everyone, friend or foe, can get so close to you, look you straight in the eye and judge you without having any control over it or being able to respond. A part of them has become the property of the photographer. All photographs are memento mori. To take a photograph is to participate in another person's, or thing's, mortality, vulnerability, mutability. Precisely by slicing out this moment and freezing it, all photographs testify to time's relentless melt. Between photographer and subject, there has to be distance. The camera doesn't rape, though it may presume, intrude, trespass, distort, and at the farthest reach of metaphor, assassinate - all activities that can be conducted from a distance, and with some detachment. Still, there is something predatory in the act of taking a picture.