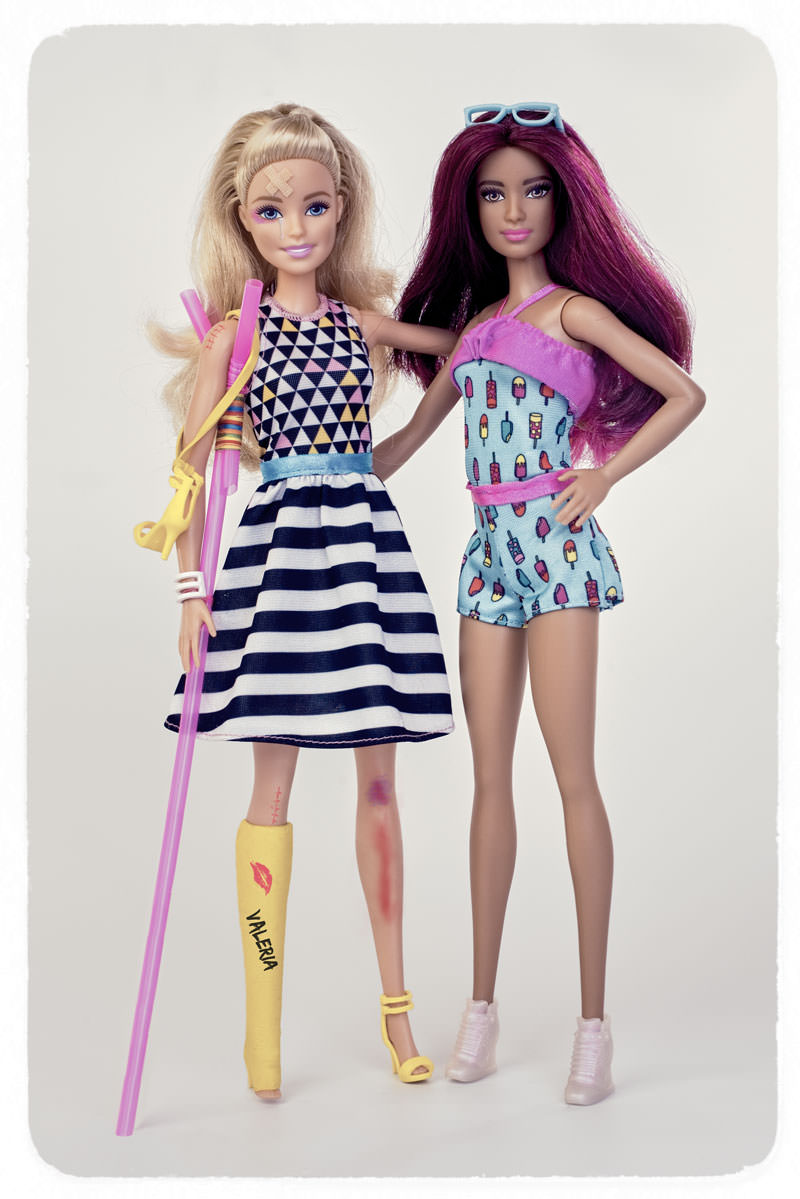 One Broke Barbie Doll | Living Without Friends Is Not Living

Barbie Veruschka, the mistress of insanity, lost control over her beloved space hopper and dived off the table's edge. Now, after hospitalization, Valeria takes care of the poor, wounded drama queen.

In the darkness of the light a Broken Barbie weeps: "My flesh was violated and my heart has been damaged. A dark evil harassed me and abused me. My porcelain world was wrecked and began to crack and break. I am crushed by that evil, sucked into the darkness of fear! I am weak - for the hurts have not passed away yet. I am doomed to helplessness and pain." The Creator Shaman was passing by when he heard her weeping and placed his totemic lens on the ground under her eyes blind with tears: "See here, you are broken but not dead! Forget what lies in the past, and reach forward, to what lies ahead. I will boost your weaknesses with my totemic lens - for power is made perfect in weakness. I will glorify your broken soul, and by serving creativity you will channel your tears into the book of powerful beings. Develop your wings and your feathers - one who has wings will fly off to immortality. A strong woman is a woman standing on tiptoe, shrugging her shoulders and lifting her head. My creativity resurrects you, once at every blink - at the speed of my shutter! Despair crushes the soul, but art has the power to heal and the power to remind us that we have one." ~ Shadia Alem 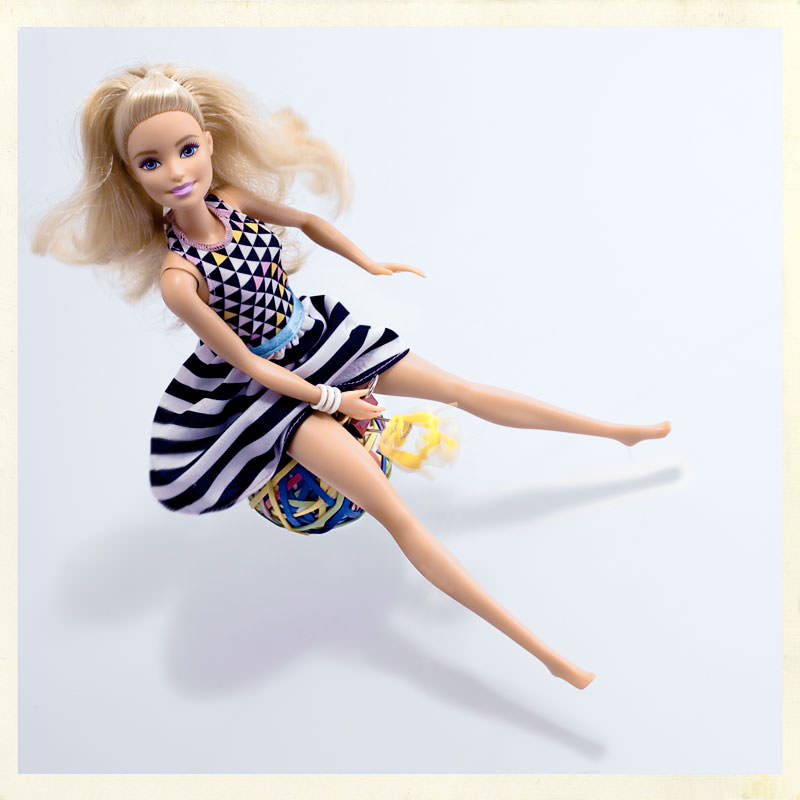 Barbie Veruschka has spotted a new favorite toy. Every day, in the very early morning hours, she saddles up her space hopper and jumps around on every table trying to catch anybody's attention.

To be manufactured allows me to understand what it means to respect a process. Batch no. 8176. If you want to play this game, then you must pay the price of your authenticity. My blueprint demanded time to perfect, like the time it takes to create a nostalgic photographic effect just with the mixing of color and texturing. Not every image enjoys an equal effort and not every doll enjoys the same privilege. Knowing this already made me feel the pressure to succeed. To excel. I am a Barbie doll - built to perfection. Meticulous care applied to my make-up and hair. My dress. Accessories. My end user is a puppeteer. I had to accept the fact that he could dress me and undress me. Move me, play with me in any way he saw fit. There are worse fates, I guess. Some users are very rough on their dolls. "What's their biggest fear?" Ending up in Voodoo land at the mercy of the master, and so my quest was born. As ambassadors of playthings, we must play, but in doing so, highlight our abuses around the world - the suffering to please man's dark pleasures. Now quests aren't quests without friends to share them, so together we charmed our way into the pockets of the picture taker who promised to document our games. We left carrying with us the pin-cushioned souls of the doomed dolls and a message of defiance to the men. I learned that to make the photograph look effortless requires nothing less than the soul I did not possess, and thus was born a new quest - a trip to the birthplace of the wild woman to lose my comfortable mind and so become alive. ~ Barbie Q 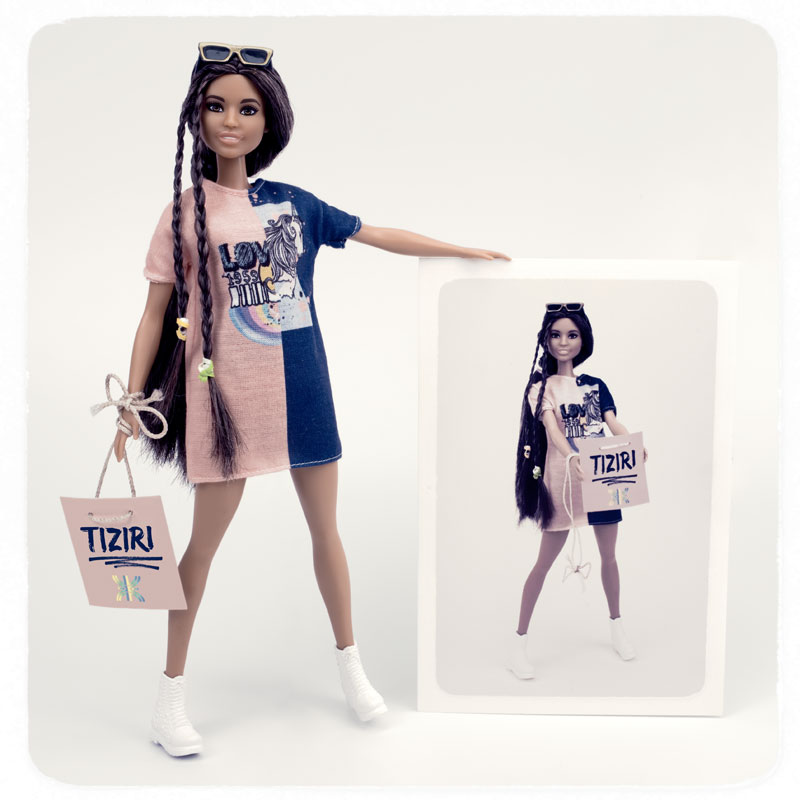 Daguerreotype, but I am no process. I have existed since time was invented and I made my home in the photographic images through which I dwell. I live, timeless and not alone but with the essence of everything that has been captured. Caught with the click. I use the 'punctum' to reveal myself. That 'thing' that moves you, my viewer. That makes you turn back and look again, or that causes you to linger on me in your mind. When you close your eyes and conjure the image, THEN. Beautiful. Unforgettable that moment when I permeate to your soul. Society wants to tame my photographs. Temper the madness, so make it an art conforming me to its particular rules. Tame the wildness. Tame the picture, or free the insanity by making the realism absolute. When the living and terrified consciousness is faced with the timeless photographic ecstasy. Those movements that are caught in the corner of your eye where I stay, locked between your thoughts of self-doubt and disbelief. Once discovered, we become trapped and connected. Me and you, the discoverer. ~ Barbie Q 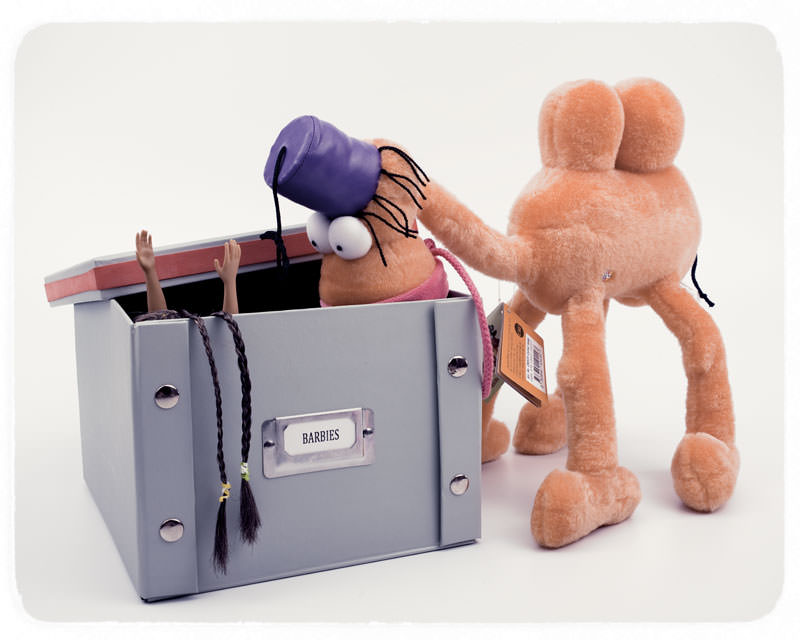 I was free on every road as my home. No limitations, no commitments. But summer passed and winter came and I fell short for safety. I fell for its spell, slowly humming me to sleep because I was tired and small, too weak to take or handle those opinions and views, attacking me from every angle. Against my art, against my self, against my very way of living. The camel traders have stopping places along their routes called caravanserai. Sometimes they are hundreds of miles apart, over desert or mountain range, but they travel safely in the knowledge that there will be a place where they can shelter and find succor at the end of their journey. Even if they have never been that way before, they are sure that there will be such a place; that sooner or later, they will find a caravanserai. No one could know what lay beyond today, but you had to hope, and be brave, and trust that all would be well. I collected my thoughts, my few possessions and built fences around my values and character. I protected my definition of beauty and success like a treasure at the bottom of the sea, for no one saw what I saw, or felt the same as I did, and so I wanted to keep to myself. Down in the box I hid to protect myself. 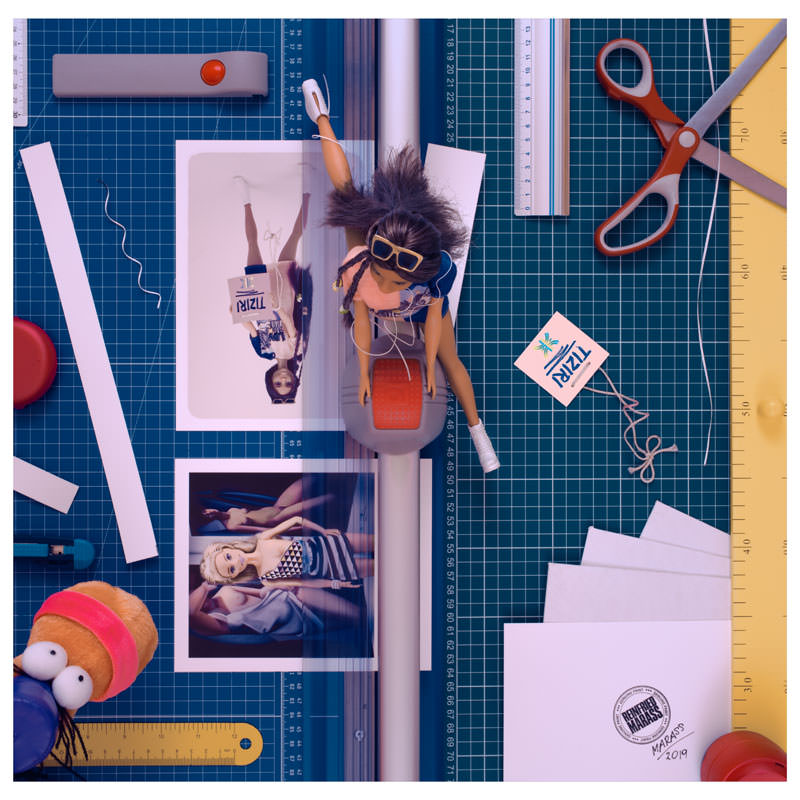 While Barbie TIZIRI acts as a marionette in Alexander Calder's Cirque, Theo van Doesburg counters Piet Mondrian's carefully aligned squares who is tracking down Wassily Kandinsky's points to lines and Fibonacci is just around the corner to add some retracement levels to the colorful plane. Camel, with its always curious full-moon nose, is carefully supervising the ongoing action.

To collect photographs is to collect the world. With still photographs, the image is also an object, lightweight, cheap to produce, easy to carry about, accumulate, store. Photographs, which fiddle with the scale of the world, themselves get reduced, blown up, cropped, retouched, doctored, tricked out. They age, plagued by the usual ills of paper objects; they disappear; they become valuable, and get bought and sold; they are reproduced. Photographs, which package the world, seem to invite packaging. They are stuck in albums, framed and set on tables, tacked on walls, projected as slides. Newspapers and magazines feature them; museums exhibit them; publishers compile them. For many decades the book has been the way of arranging, and usually miniaturizing, photographs, thereby guaranteeing them longevity, if not immortality - photographs are fragile objects, easily torn or mislaid. The photograph in a book is, obviously, the image of an image. 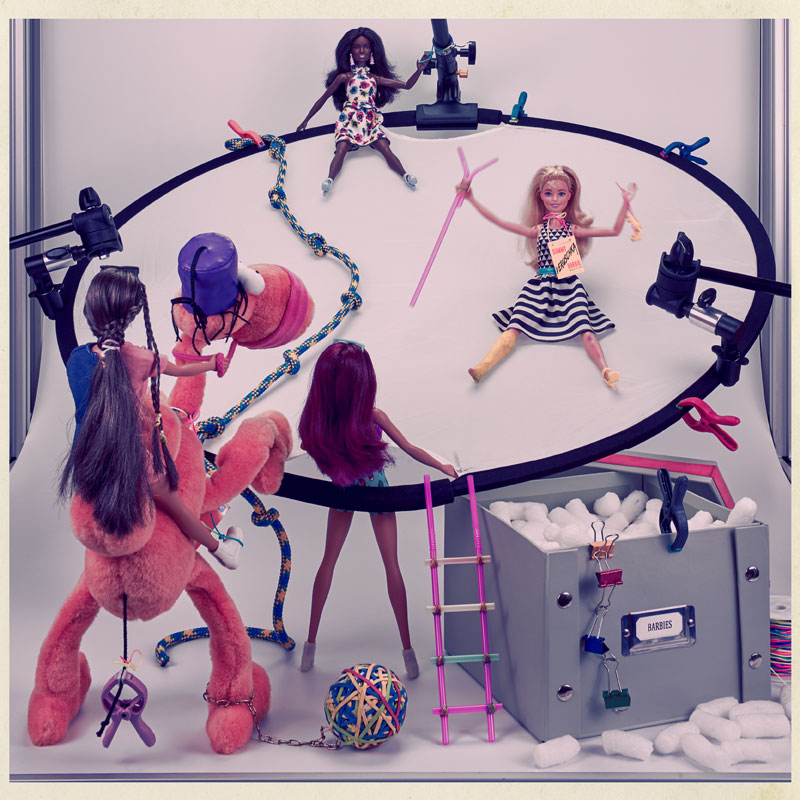 The Gang of Folies Barbie was hired by a Chinese manufacturer to put their critical eyes on one of its photographic accessories - a folding reflector. Initially made to reflect the light up to their will and to filter out all the blemishes the got by their stupid playings all day long. If it's good enough for a Folies' Barbie, it's good enough for the rest of the world. As usual for Barbie girls they understood nothing about the technical handling, neither did they read the manual, and misused the reflector for entertainment only. At least it did withstand CAMEL, who usually bites in all and everything ...

Great artists make the roads; but there ain't no free rides, baby. No hitchhiking. And if you want to strike out in any new direction - you go alone; with a machete in your hand and the fear of God in your heart. Life is not a journey to the grave with the intention of arriving safely, but to skid in broadside, thoroughly used up, worn out, and defiantly shouting "Wow, what a ride!" There are only two mistakes one can make along the road to self-fulfillment; not going all the way, and not starting. Life is one big road with lots of signs. So when you riding through the ruts, don't complicate your mind. Don't bury your thoughts, put your vision to reality. There are roads known by everyone and there are roads known by no one. Choose the second, the mysterious one where many glories are hidden. The middle of the road is where the white line is - and that's for sure the worst place to drive. 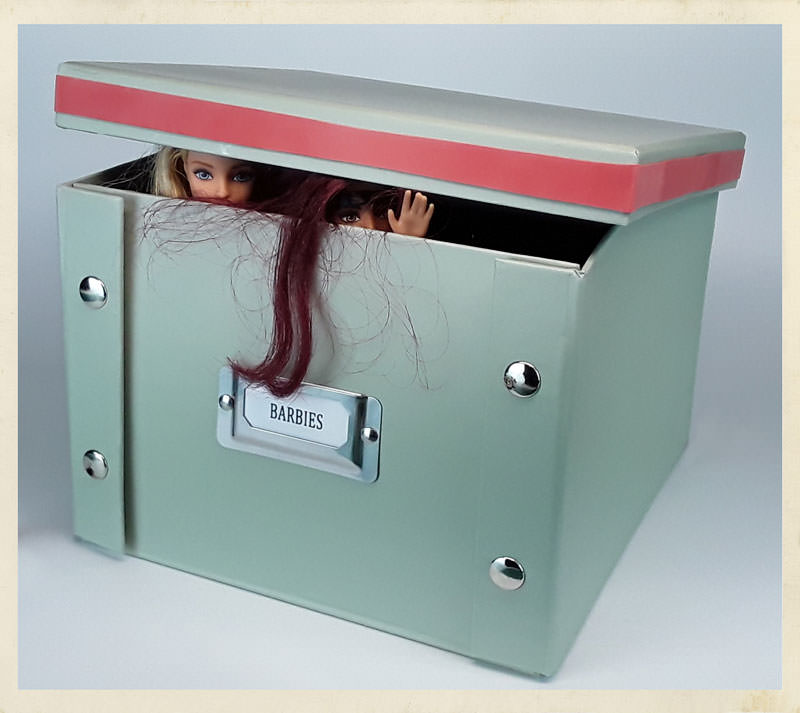 Barbies Doll House | In Photographing Dwarfs You Don't Get Majesty And Beauty, You Get Dwarfs

Our home has been nothing but a playroom. I have been your doll-wife, just as at home I was papa's doll-child; and here the children have been my dolls. Barbies Veruschka & Valeria are not that happy with their boxed flat. No separate bedrooms, no heated bathroom mirrors, no French balcony, no pink doorbells and, worst of all, poor cellular reception. Girls, blah blah blah, complaining all day long ...

To be a seductress for a photographer. What was the Barbie like before she was photographed? What did she look like, how was she different from other women, how was she similar to other women? Girls & women, muses & models, as well as other females were the sources of creative expression for myriads of photographers and probably also for any other creative person out there since the term art was inaugurated. But keep in mind that therefore creating a work of art takes a lot of understanding of the female being. And a lot of patience too. I've set the scene. I set up the cage. And I waited. Someone wrote about how to do a bird's portrait and that one has to wait and not to get discouraged while waiting. It had to be perfect, comfortable. Girls are so predictable and I got what I was looking for. I caught my birds. "Big Shot, you left us without a Coke in the box! Do you like to photograph us to sleep? Sometimes you don't seem to give us credit for very much intelligence at all - hey, we're magazine readers! There's a need for girls that hide in a 'lil greenish box to stay away from the photographer and we don't want to be framed by one that would make us stay in a house as tiny as a crib! Big Shot, you're a mess. Do you know what they call such people? Peepin' Toms! If you don't stop taking pictures of us we're gonna plug up the lens on your camera with chewin' gum!"