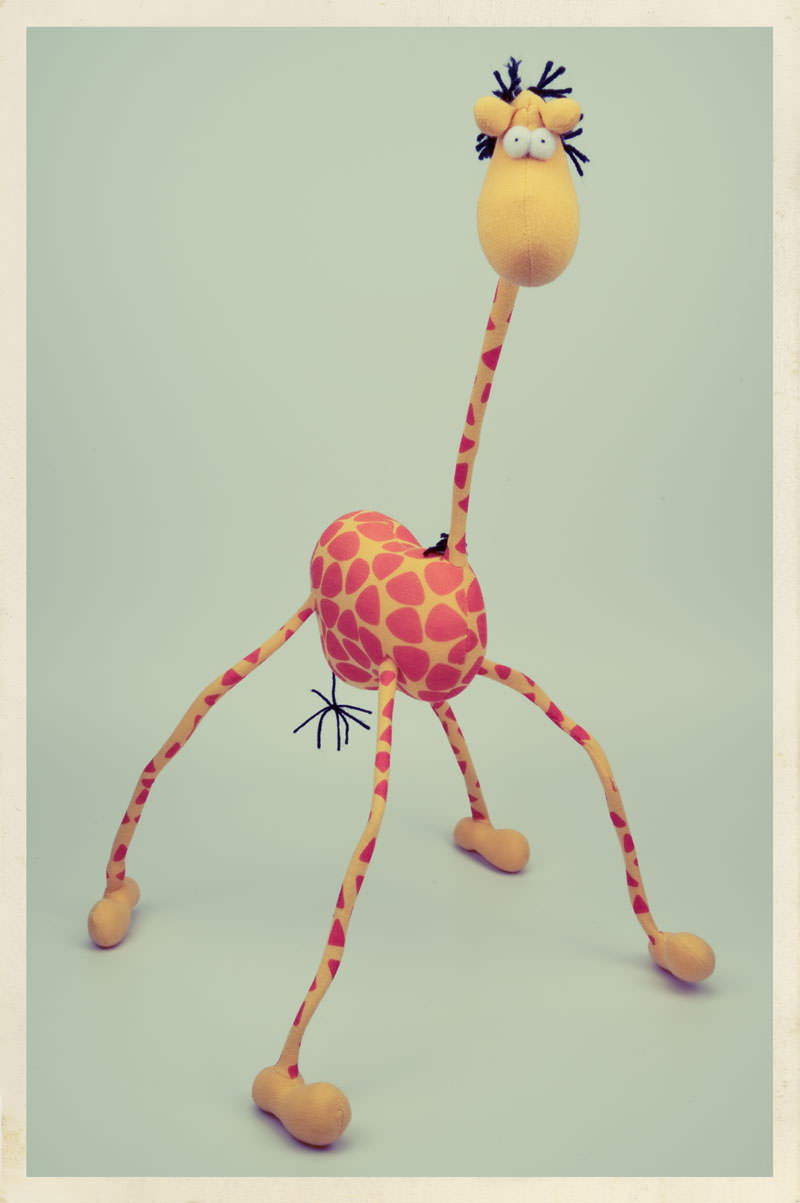 Jirafita T. Camelopard | What Does The 'T' Stand for? The!

Every act of will is an act of self-limitation. To desire action is to desire limitation. In that sense, every act is an act of self-sacrifice. When you choose anything, you reject everything else. Every act is an irrevocable selection and exclusion. Art is limitation; the essence of every picture is the frame. The moment you step into the world of facts, you step into a world of limits. You can free things from alien or accidental laws, but not from the laws of their nature. Do not go about as a demagogue, encouraging triangles to break out of the prison of their three sides. If a triangle breaks out of its three sides, its life comes to a lamentable end. This is certainly the case with all artistic creation, which is in some ways the most decisive example of pure will. The artist loves his limitations: they constitute the thing he is doing. Do not free a camel from the burden of his humps; you may be freeing him from being a camel. If you draw a giraffe, you must draw him with a long neck. If in your bold creative way, you hold yourself free to draw a giraffe with a short neck, you will really find that you are not free to draw a giraffe. 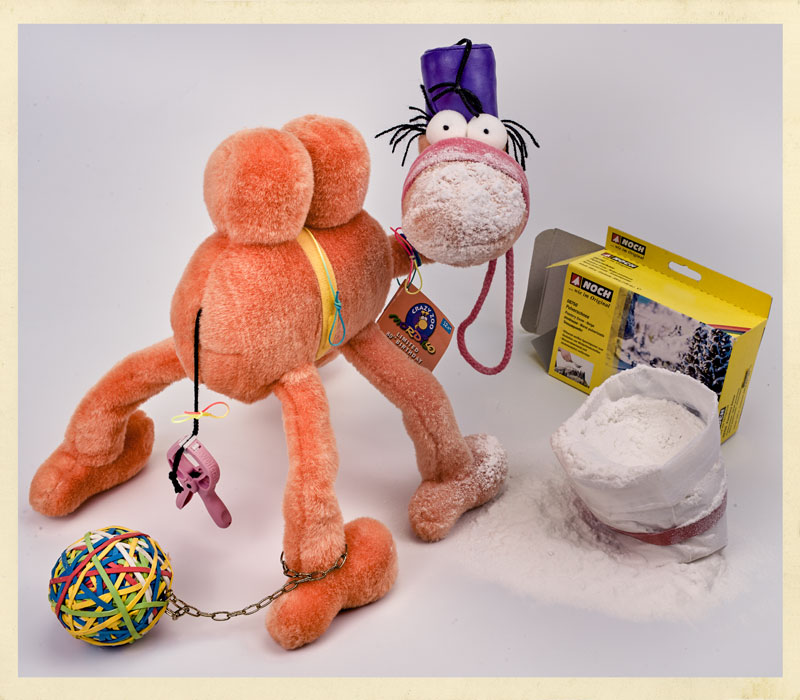 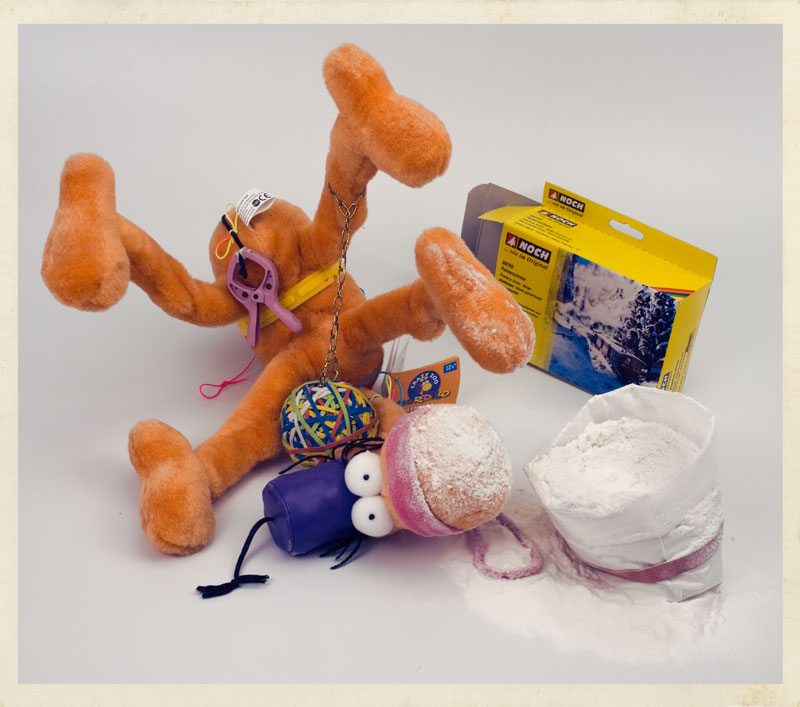 Camellito's Mess | Meth Or Snow? No No No!

December 17, 2019: the first snow has arrived at the Folies Barbie revue. CAMEL, born in the Nubian desert and therefore unfamiliar with this white powder, was told by those tricky, nasty and mean Barbies that it is Crystal Meth. Always curious and adventurous, it dipped its round nose deep into the sack. Now, CAMEL is on the back, thinking that it is stoned, singing: "The snow which drives us downhill" & "Snow can burn your eyes, but only Barbies make you cry." Well, imagination dies last.

Photography is concerned with all the ten attributes of sight; which are: darkness and light, solidity and color, form and position, distance and propinquity, motion and rest. The photographer who shoots merely by practice and by eye, without any reason, is like a mirror which copies every thing placed in front of it without being conscious of their existence. He who can copy can do, but he will produce pictures of little merit if he takes the works of others as his standard. The worst evil which can befall the artist is that his work should appear good in his own eyes. I have offended God and mankind because my work didn't reach the quality it should have. Art is never completed, only abandoned. Every now and then go away, for when you come back to your work your judgment will be surer. Details make perfection, and perfection is not a detail. A master knows he has achieved perfection not when there is nothing left to add -- but when there is nothing left to take away. 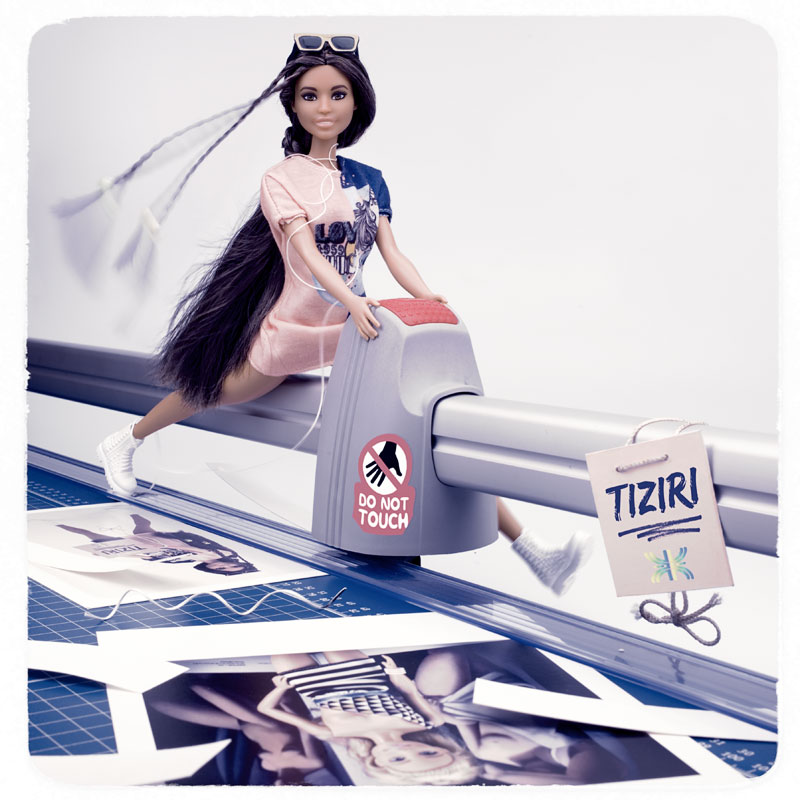 Snip Snap | The First Cut Is The Deepest

Although TIZIRI was the last in, she's the first one out with a little autograph card. Fueled and fully empowered by this fact, she's operating the roller trimmer with lightning speed. Snip, snap, snip, snap it goes. She even is allowed to cut down the card of the Folies' injured master bitch VERUSCHKA.

The world is always running away from society and the only way to keep the stuff that has happened in the past is by taking photographs. People say that a time machine can not be invented, but they have already invented a device that can stop time - cameras are the world's first-time machines. We can keep memories of things alive with photographs. We have been able to rescue it on film, and no one can remediate those photographs, we can keep them as long as we want to. It seems positively unnatural to travel for pleasure without taking a camera along. Photographs will offer indisputable evidence that the trip was made, that fun was had. A way of certifying experience, taking photographs is also a way of refusing it - by limiting experience to a search for the photogenic, by converting experience into an image, into a souvenir. The camera makes everyone a tourist in other people's reality, and eventually in one's own. Needing to have reality confirmed and experience enhanced by photographs is an aesthetic consumerism to which everyone is now addicted. 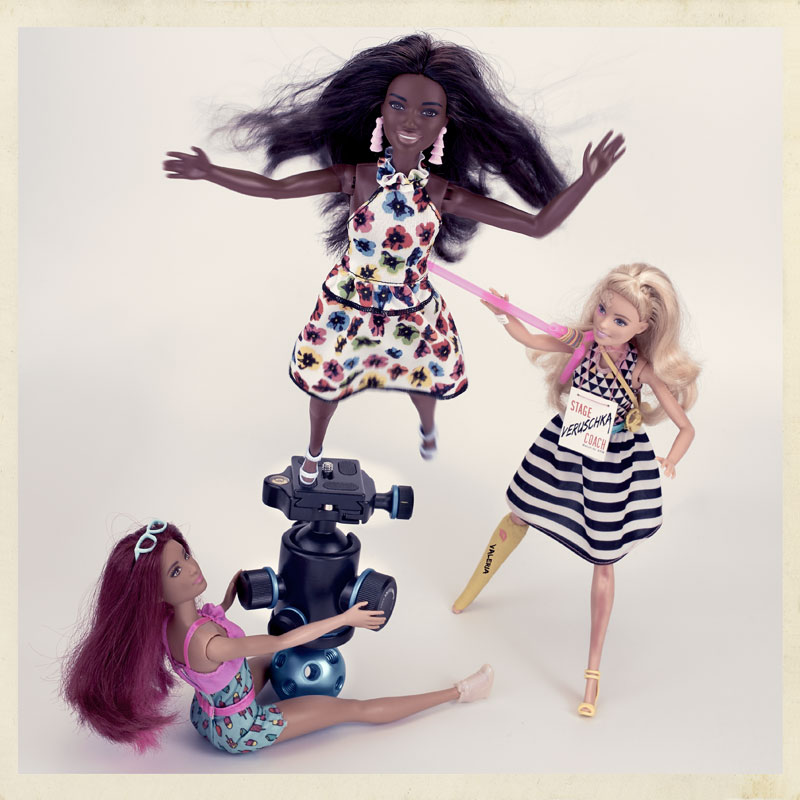 Pata Pata | Objects In Images Are Closer Than They Appear

Choco Barbie ASHANTI features Afropop table dancing on a tripod's ball head, operated by VALERIA. To show how Miriam Makeba 'leveled the bubble'. Bitchy VERUSCHKA thought that she shouldn't be the only wounded one in the Barbie gang and knocked her off to introduce her to 'stage diving'.

The camera can be lenient; it is also expert at being cruel, but its cruelty only produces another kind of beauty, according to the surrealist preferences which rule photographic taste. Surrealism lies at the heart of the photographic enterprise; in the very creation of a reality in the second degree, narrower but more dramatic than the one perceived by natural vision. Photographs are perhaps the most mysterious of all objects that make up and thicken, the environment we recognize as modern. Photographs really are experience captured, and the camera is the ideal arm of the consciousness in its acquisitive mood. The ultimate wisdom of the photographic image is to say: there is the surface, and now think - or rather feel, intuit - what is beyond it, what the reality must be like if it looks that way. To photograph is to appropriate the thing photographed. It means putting oneself into a certain relation to the world that feels like knowledge - and, therefore, like power. Through photography and image, I have been afforded the privilege of sharing the stories and myths of life with others. The process for me became self-revelatory. It was a process of soul-making, something all humans are engaged in, no matter their endeavor - I see a part of myself in each subject I photograph. 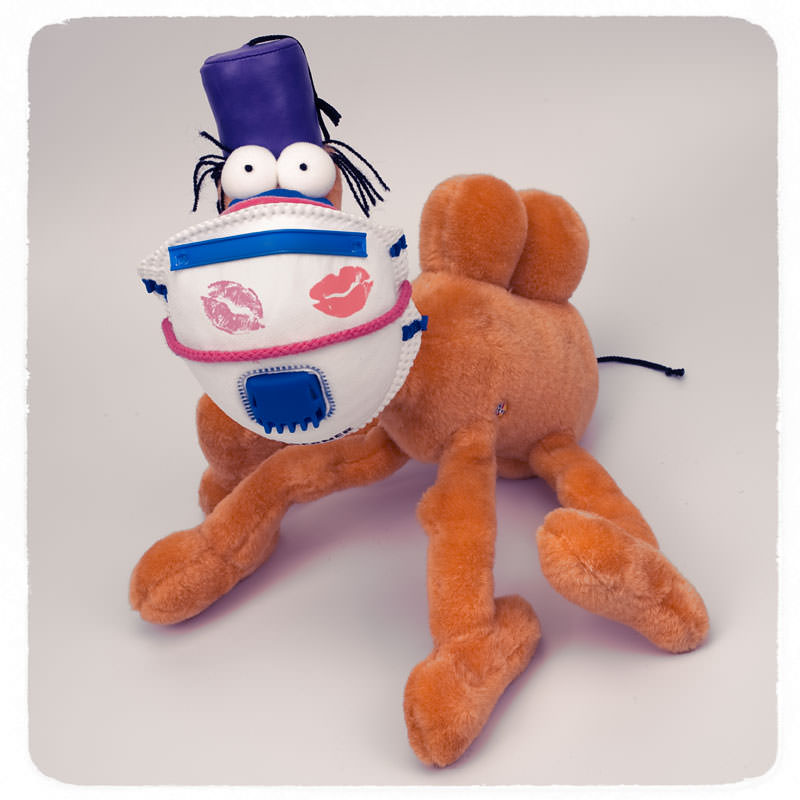 Masquerade | Playing A Fool Is The Best Paid Role

CAMELLITO, the little braveheart orange camel, planned to go outside and to hunt and to bite the Corona-Virus to death. But the Barbies joked that much about the silly look with the oversized mask over its big nose that CAMELLITO finally decided to stay at Folies' home and leaving the world to fate.

Masks! I see them everywhere. That dreadful vision of the other night - the deserted town with its masked corpses in every doorway; that nightmare product of morphine and ether - has taken up residence within me. I see masks in the street, I see them on stage in the theatre. They are on the balcony and in the orchestra-pit. Everywhere I go I am surrounded by masks. Masks crowd around me in the foyer. It is truly too much to bear: to feel that one is alone and at the mercy of all those enigmatic and deceptive faces, alone amid all the mocking laughs and the threats embodied in those masks. I have tried to persuade myself that I am dreaming and that I am the victim of a hallucination, but all the powdered and painted faces of Barbie dolls, all the rouged lips, and kohl-blackened eyelids. All of that has created around me an atmosphere of trance and mortal agony. Cosmetics - there is the root cause of my illness! But I am happy, now, when there are only masks! Sometimes, I detect the cadavers beneath and remember that beneath the masks there is a host of specters. 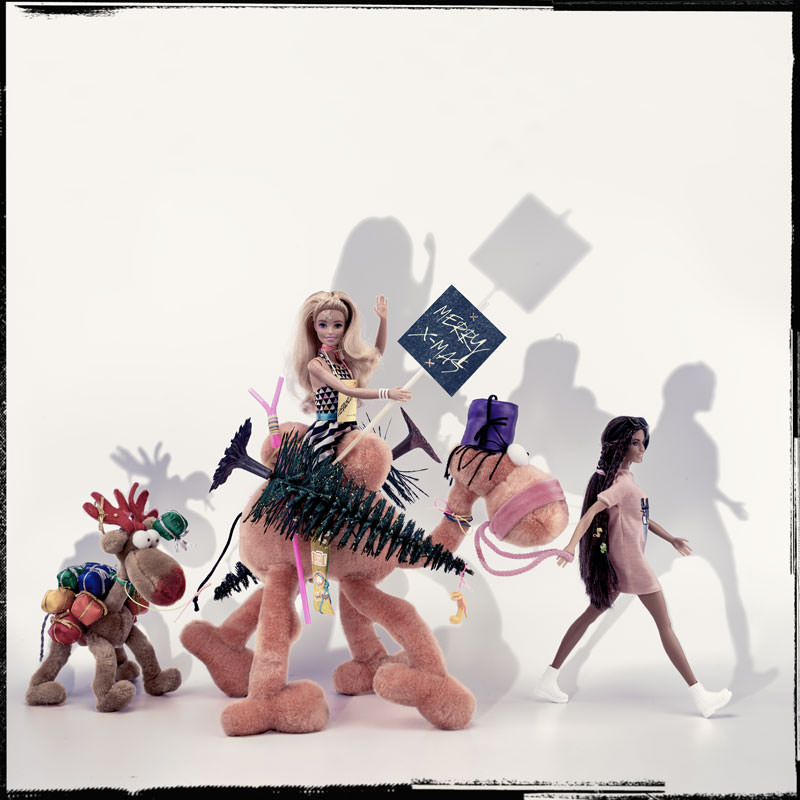 Christmas Caravan | In The Desert The Sun Casts Long Shadows

The climate is changing. Very fast. Too fast. Palm trees escaped to the North Pole. Christmas trees are now harvested at oases deep in the desert. A job for CAMEL. Salt no more. Reindeer Rudolph is dragged after. And at home people are sitting under the Christmas tree singing: "Last Christmas ..."

Is a picture really worth a thousand words? What thousand words? A thousand words from a lunatic, or a thousand words from Nietzsche? Actually, Nietzsche was a lunatic. And what about a thousand words from a rambler vs. 500 words from Mark Twain? Photographs, which cannot themselves explain anything, are inexhaustible invitations to deduction, speculation, and fantasy. Standing alone, photographs promise an understanding they cannot deliver. In the company of words, they take on meaning, but they slough off one meaning and take on another with alarming ease. In contrast to the written account - which, depending on its complexity of thought, reference, and vocabulary, is pitched at a larger or smaller readership - a photograph has only one language and is destined potentially for visual readers. Many photos speak a thousand words, but only a few contain a whole library. 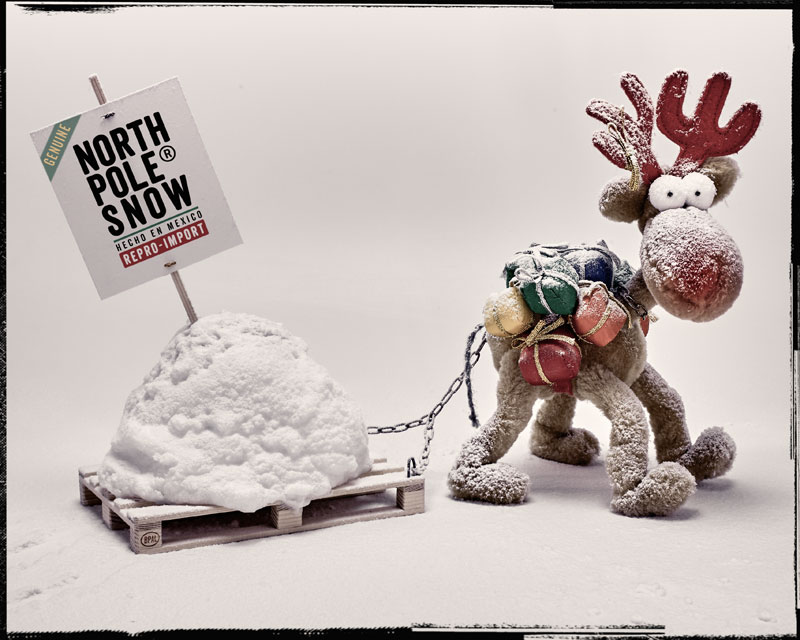 Volundeer | Out In The Frozen White The Deer Step Slowly

Rudolph, the infamous red-nosed reindeer, quitted the job at Santa's, became a renegade and decided to stay a while as a Reindeer-Volunteer for an internship with the insane Barbies at the revue theater. The Barbies promise by far more fun and entertainment. Rudolph doesn't want to be just a seasonal pet and also at home everyone is making fun of him because of his reddish front-end. Well, we all know the story. The whole staff wanted to keep him busy. Australia sells its sand to the Arabs and so the tricky Barbies established a new company - 'Folies Barbie, Inc.' - to sell 'genuine' snow from the North Pole. Of course, with VERUSCHKA as the company's Chair-Barbie. Gone are the quiet days, and also the quiet nights in Clichy. The air was filled with noises of cutting, sawing, drilling and hammering when Christmas trees were recycled to construct and manufacture an own, normed BPAL Barbie-Pallet; sized to match their's, and also Rupolph's scale. The mistresses are thrilled to be in import-export business now and they feel pretty cool as business Barbies. If you are in the need of snow for your Jardin d'Hiver just call toll free '1-800-SNOW' for inquiry. Some snow is always on stock. Guaranteed next day delivery - with the shiny nose, Rudolph find its way thru' any weather ... 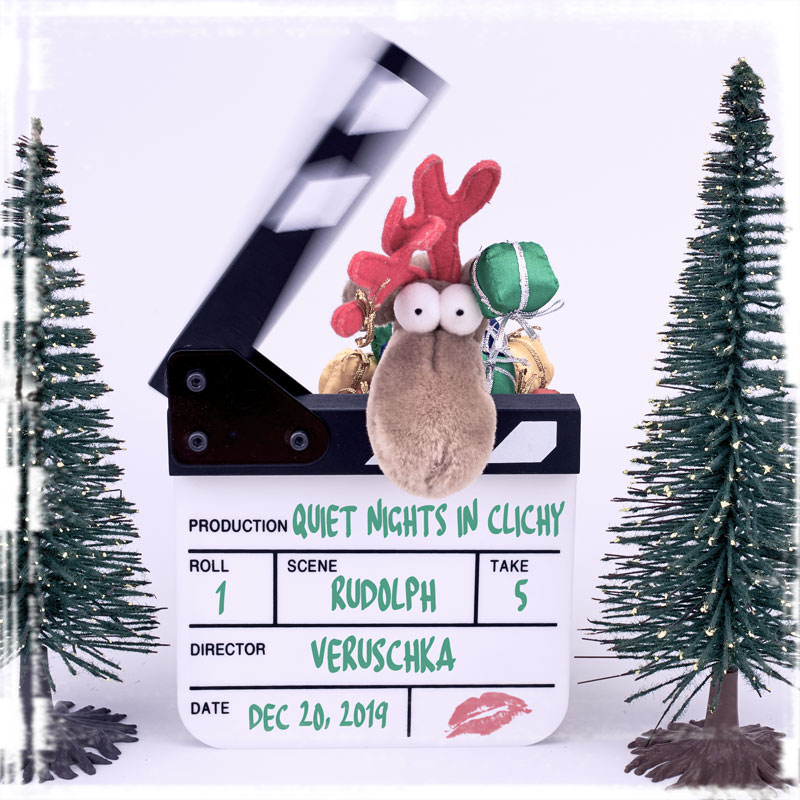 Casting Rudolph | What's In The Frame And What's Out

Those days insane Barbies, the greatest moviemakers under the sun, are very busy with their own Christmas production 'Quiet Nights In Clichy'. An adaption of Henry Miller's novel. For now, they are casting various reindeer for the role of Rudolph. The Folies' make-up-artist is on strike, pregnant also, and so the red nose has to be accomplished by slamming the clapperboard - in the name of art.

We make, see, and love films, not digitals. To convert all of our movies, videos, photographs and television to digital would be like telling a painter to throw away his brushes and canvas for an I-Pad. Celluloid isn't just nostalgic, it's an art form and, like it or not, it's superior to digital. It lasts much longer, it provides grain and brighter colors, and it takes more effort so that it produces something wonderful. With the inferior binary codes, pixels and untested shelf-life of digital files, plus the fact that these days anyone with a digital camera, even a two-year-old, can make a video and pollute the world with self-photography and cat pictures, film has a lot more integrity and worth than digital.