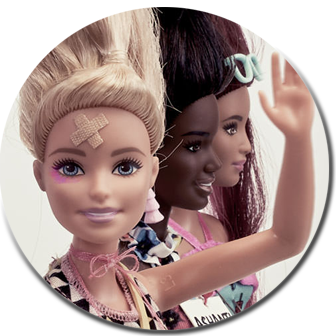 The adventures of three broke Barbie dolls who now have to serve as showgirls in the 'Folies Barbie' revue theater. This cartoon-strip-commentary explains why 'Without Barbies photographs would be mere images'. They represent an impressive collective thought. A product of music, painting and poetry, literature, movies, fashion, fantastical imagination, and photography - but please do not refer to that as art. It is the creation of a group who are thieves stealing inspiration from everywhere. Working together and so sharpening each other through the interaction. It is the best form of inspiration and abrasion. It hurts. Often. Which is why there is laughter, often. A motley crew who invite you to join the madness. A delicious satire and 'Cirque Calder' of 'photographic art installation'.

The three broke Barbies are 'Mistresses of insanity' sustained on the constant sipping of Courvoisier, adding to their craziness and making them as nutty as a fruitcake. A true Barbie doll's perspective brings storytelling photography alive. A Barbie is a Barbie is a Barbie - they are a reflection of what it is to be female. The good, the bad and the ugly. A doll's life journey, mostly with hidden metaphors, seen through the lens of puppeteer and photographer Reinfried Marass.

'Barbies are the makeup for photography' because, by nature, female characters are the most celebrated storytellers around. By letting them tell their story, Folies Barbie reflects the woman's honest and raw perspective. It is this grace that transcends and creates animation even in inanimate objects. In Folies Barbie's photographic work, analogies are used to add some fun and friction in a way that only dolls know how to do.

Introductions are always such tedious requirements, but here you are, with your questions and expectations and being Barbies, we like to please. We play with something to say, which is most often in conflict with our puppeteer - the one convinced that he is, in fact, the master and commander of our little show. The result is a madhouse of pure female delight. We love your opinion, so go ahead, but know that madness is contagious - And.Don't.Ever.Call.Us.Babes.

The blonde Master Barbie is also the revue's Master Bitch and princess. Batch no. 8176. A gold digger who was married rich once but got divorced and left broke by her latest, third husband. She is addicted to fashion with an overdose of self-esteem, but argues "is there such a thing?". Me, myself and I. She sees herself as the world's most beautiful and desirable Barbie doll that deserves the spotlight all day long. Her cheeky Mae West temper comes close to the German-based 'Lilli', a cartoon character later turned toy, innovated by the German 'Bild' newspaper reflecting the new female post-war self-esteem. 'Bild Lilli' is the blueprint for the Mattel Barbie doll and later in 1964 the company obtained the rights. Veruschka's name is derived from the Countess Vera von Lehndorff, the leggy, tall, famous model icon from the 60's made well known to the public for her act in Michelangelo Antonioni's movie Blow Up starring actor David Hemmings as photographer David Bailey. Veruschka is the Barbie staff's big teaser and the Revue's self-proclaimed 'Stage Coach'. Technically, with her bright skin and blonde hair, she is responsible for the highlights in a Barbie photograph.

'The first' when she was found discarded and drugged in the seats of an abandoned Cadillac DeVille. The gang's red hair with French roots and the revue's eponym. Folies Barbie is named after the famous Parisian Folies Bergère Revue theater where the French term 'Folies' means 'crazy'. She's a bit of a clumsy Barbie doll but usually a kind soul. Best friend - and also the only one - to Veruschka and of course her favorite punching ball. A withdrawn and reflective character. A sensitive thinker that makes her a rarity. A funny person who never smiles. Usually the venue's peacemaker. Technically, with her darker, tanned skin and red hair, she is responsible for a photograph's mid-tones.

The gang's 'Choco Barbie'. An original Afro-African Barbie doll who only speaks Swahili so comes across as shy. A poor, orphaned Barbie with a ground-out batch number that was traded in for a sack of beans by the puppeteer at a slavery doll market down in Joseph Conrad's 'Heart Of Darkness'. Master-Slave to Stage Coach Veruschka. Named after a movie starring uber-beauty Beverly Johnson who was the first face of color to feature on an international fashion magazine cover. Technically, with her raven-black hair and chocolate skin, she is responsible for a photograph's dark tones.

An original Berber Barbie, in a way a Berberella. She comes from down a valley of the Hoggar mountains. She can tame wild camels and been raised in a matriarchy system where her grandmother still was the village's witch and shaman. Her hair never was cut since the day of her birth. In her language TIZIRI stands for 'moonlight'. She swallows men like candies and is chatting away all day long in some weird Berber slang mixed up with some French terms. She was gifted to our Master & Commander for his birthday and from now on will be a regular guest star to the Folies Barbie.

TIZIRI has a background as fascinating as her Berber Barbie roots, soaked in tradition and vibrant culture. A talented storyteller, she shares her memory of her homeland, her move to France, and the circumstances that brought her to Folies Barbie. She speaks of a camel, who was left behind - no camels for France! As she remembers, her face turns troubled. All-day long, she laments and at night, cries a river into her pillow, forcing Master & Commander to find a replacement for her. This camel was to be of a high standard, a beast of exceptional breeding, only the best for TIZIRI, and this was no easy task. Its story was found bound in documents hanging around its neck and tells of its discovery, as a calf, almost dying of thirst in the Nubian desert, left for dead by celebrity-wannabe parents cast as extras in Howard Hawk's Hatari movie. Raised in Mordillo's crazy zoo, it learned such exquisite skill as standing on three legs, two when drunk. Yes, unfortunately, Camellito fell victim to the familiar story of country youngsters fending for themselves in harsh urban environments, and it developed a taste for alcohol. Found worthy of TIZIRI, it was shipped from the zoo via Khartoum, Kairouan, Sidi bel Abbès, and Marseille, down the Danube to Austria, tied down on a wooden palette. At three years, Camellito is but a teenager and so fits in at Folies Barbie. Introductions were smoothed over by the free-flowing Courvoisier, a favorite drink of its Barbie carers, and a fact that adds to Camellito's insanity. Inebriated, it totters around sticking its curious nose in every photo set resulting in a re-take, often, which means work for Barbies and a less-than-amused photographer. The problem was fixed by attaching a heavy metal ball to its left back leg, much to the dismay of this beautiful beast. 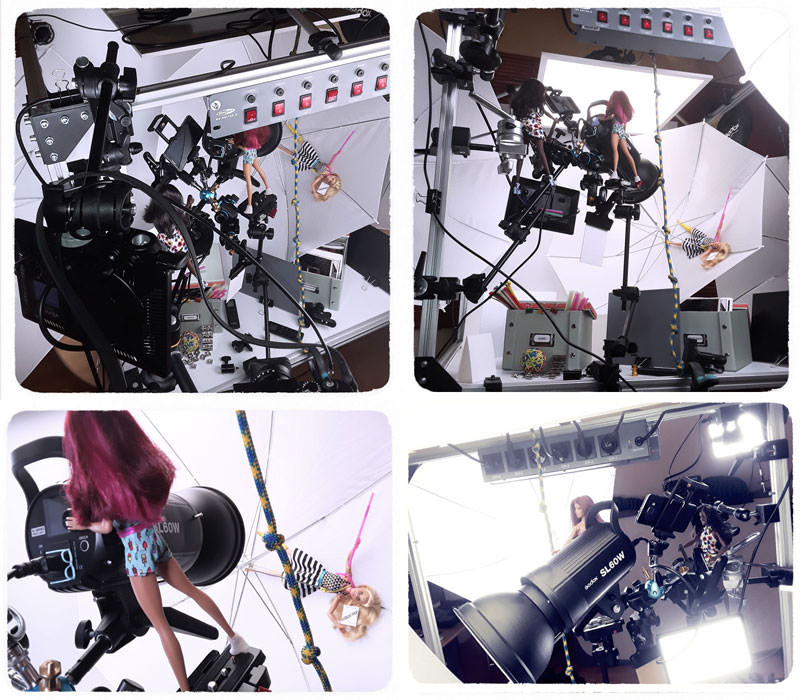 Photographer, the revue's engineering founder, and puppeteer. The Barbies' master & commander. Bwana to Ashanti. Responsible for all & everything. The caretaker who shares a love-hate relationship with the showgirls and 'queens of unboxing' and 'general disarray' who are spending all his money on fancy stuff and gadgets. Ever get the feeling that you could just kill someone? It was that very sentiment shared by the photographer that resulted in the first introduction to a Barbie discarded in an abandoned Cadillac DeVille. Besides, with a choice of picturing a babe or Barbie, the selection seemed obvious. Barbies follow instruction. They are compliant for as long as necessary, and they don't tend to voice an opinion. So they got the jobs. The problem soon to be discovered was that Barbies take exception to trash and life got complicated. After much negotiation, they reached a comfortable symbiosis. Barbies could stay, working at the Revue theater at night to pay their way.